BEING SINGLE, A LIFE OPTION

“So you may walk in the way of goodness, and keep to the paths of righteousness” (Proverbs 2:20). 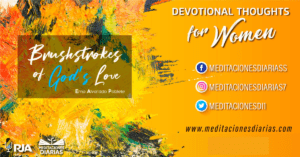 BEING SINGLE is becoming a life option for many women, and it doesn’t mean they’re worth less than married women. Many women in past generations lived with the belief that having a husband gave them

alia value; but let’s remember that personal value and individuality are the most precious gifts God gave every man and woman when they were created. We know out value because of the price paid at the cross on Calvary, and because we came from the hands of a loving God who made us unique. No one can achieve a higher status than the one they already have by creation, much less because of their marital status. Let’s be careful with the myth of the “better half.” You, my friend, are not anyone’s half; you’re the

whole, so make the best out of it and enjoy the status God gave you.

It seems that Mary, Moses’s sister, never got married; however, references to her in God’s Word portray her as a great woman, with strong and productive leadership over the people, and who served as her brothers’ right hand at a time when women’s leadership wasn’t very accepted.

The level of satisfaction in life can’t be measured by the marital status. A married woman isn’t happier than a single one, and vice versa. You can be happy without a spouse, because being single is a situation like any other, and the art of being happy doesn’t require anything single women don’t have.

Someone said, and with good reason, that a person’s marital status doesn’t make them happy unless it’s the result of obeying God’s pleasant and perfect will. Therefore, the only way to be happy and fulfilled is to live completely according to the will of our Creator.

A single woman’s loneliness is a myth. Regardless of marital status, people will be lonely and unhappy until they recognize before the Creator their condition as creatures and take the step of faith to become daughters of God.