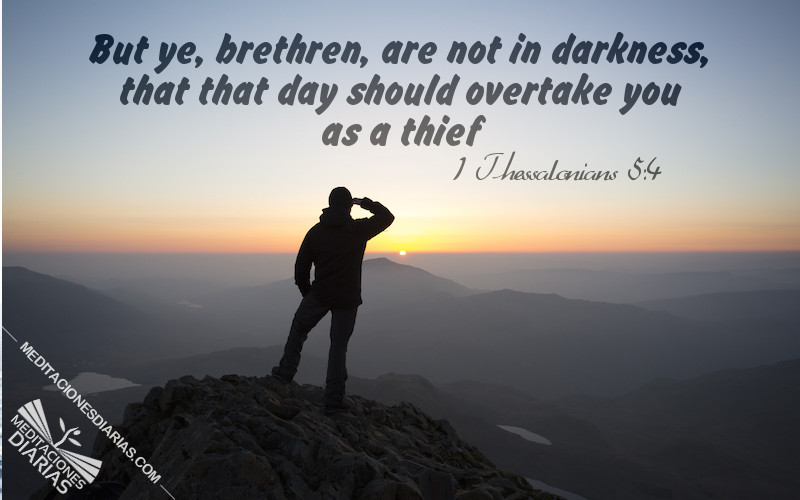 But ye, brethren, are not in darkness, that that day should overtake you as a thief. 1 Thessalonians 5:4.

I saw that Jesus would not leave the most holy place until every case was decided either for salvation or destruction, and that the wrath of God could not come until Jesus had finished His work in the most holy place, laid off His priestly attire, and clothed Himself with the garments of vengeance. Then Jesus will step out from between the Father and man, and God will keep silence no longer, but pour out His wrath on those who have rejected His truth. I saw that the anger of the nations, the wrath of God, and the time to judge the dead were separate and distinct, one following the other, also that Michael had not stood up, and that the time of trouble, such as never was, had not yet commenced. The nations are now getting angry, but when our High Priest has finished His work in the sanctuary, He will stand up, put on the garments of vengeance, and then the seven last plagues will be poured out.

I saw that the four angels would hold the four winds until Jesus’ work was done in the sanctuary, and then will come the seven last plagues. These plagues enraged the wicked against the righteous; they thought that we had brought the judgments of God upon them, and that if they could rid the earth of us, the plagues would then be stayed. A decree went forth to slay the saints, which caused them to cry day and night for deliverance. This was the time of Jacob’s trouble. Then all the saints cried out with anguish of spirit, and were delivered by the voice of God.

Before His crucifixion the Saviour explained to His disciples that He was to be put to death and to rise again from the tomb…. But the disciples were looking for temporal deliverance from the Roman yoke, and they could not tolerate the thought that He in whom all their hopes centered should suffer an ignominious death…. So in the prophecies the future is opened before us as plainly as it was opened to the disciples by the words of Christ. The events connected with the close of probation and the work of preparation for the time of trouble, are clearly presented. But multitudes have no more understanding of these important truths than if they had never been revealed.